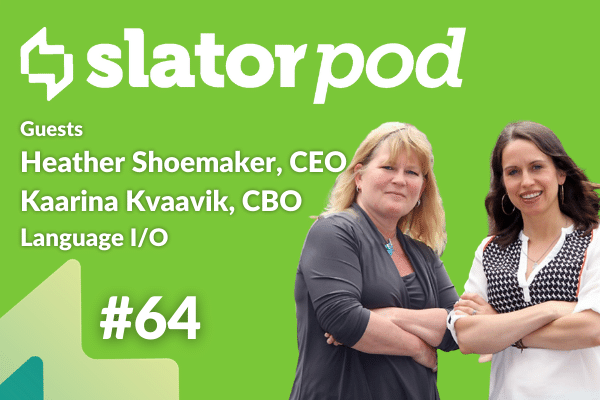 The two duo join SlatorPod fresh off their USD 5m funding round, which was announced on March 23, 2021. Kaarina and Heather discuss their journey from founding and bootstrapping Language I/O to bringing on angel and VC investors in early 2021, and their plans for deploying the latest investment.

Heather talks about the challenge of working with user-generated customer support content — which is often littered with typos, neologisms, and idioms — and Language I/O’s approach to identifying and dealing with “problematic” content. She describes Language I/O’s CRM integrations, and their approach to supporting major enterprises with their MT-based multilingual customer support offering.

Kaarina talks about the company’s tiered-subscription pricing models for both machine-only and human post-edited translation, their use of channel partnerships with CRM systems, growing the sales team, and their plans to expand beyond the customer support arena.

First up, Florian and Esther discuss the language industry news of the week, such as the role of the “translators” (read: interpreters) that facilitated the recent US-China talks in Alaska, and the differences in the coverage they received from Vice, South China Morning Post, and Reuters.

Esther shares highlights from video game services provider Keywords Studios’ 2020 financial results. The company grew revenues by 14% from 2019, while its Localization segment — which provides text-based translation for in-game content, marketing, and packaging — was the only business line to report declines. Keywords’ Audio segment grew its footprint in dubbing and subtitling for video games, TV, film, and streaming platforms as Keywords said it has an “active interest” in providing services for the adjacent film and TV market.

Florian applauds the success of his latest SaaS find: Copy.ai. The startup raised USD 2.9m with its multilingual copy-generating offering and is built atop OpenAI’s GPT-3, the world’s largest language model. Copy.ai follows in the footsteps of OthersideAI (and no doubt a swathe of other projects), which raised USD 2.6m in 2020, and attracted investors with a multi-language content generation pitch.

The two also talk about Slator’s newly released Pro Guide on Translation Pricing and Procurement, which dives deep into established and emerging translation pricing models, and lifts the lid on translation and localization procurement practices among buyers — with a dozen charts and graphs to help readers conduct their own pricing and performance benchmarking.