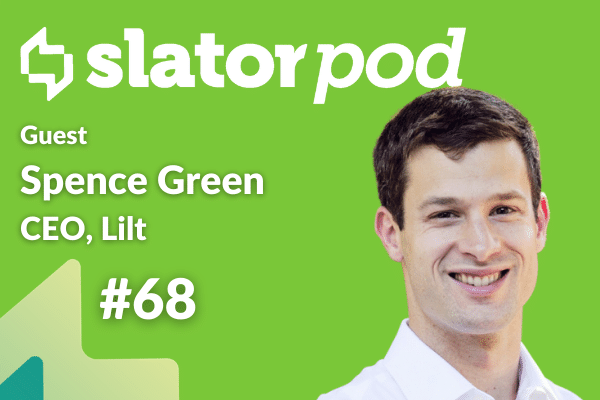 Five years ago, Slator pegged language startup Lilt as one to watch. Today, Spence Green, CEO and co-founder of the tech-enabled language service provider (LSP), joins SlatorPod to talk about the journey from research concept to enterprise-scale AI translation agency.

Having raised USD 25m in Series A funding in early 2020, Spence recalls hiring researchers, developers, and enterprise sales professionals, and the benefit of the monthly standups Lilt holds to bring together their research and customer service teams.

Spence touches on performance improvements in their interactive translation system and cites prediction scores as high as 78% — meaning that nearly 8 in 10 AI-generated translation suggestions are unchanged by human hands.

He identifies key items on their roadmap, outlining Lilt’s connector-first approach, as well as enhancing the customer review cycle with in-built tools.

With Lilt’s investors backing an AI-agency thesis, Spence says there’s still more that can be done by the industry to further automate translation and localization, and explains that the ability to dramatically reduce costs for customers involves a huge automation effort.

First up, Florian and Esther discuss the language industry news of the week, as they review the possible impact on US-based linguists of America’s PRO Act, which passed in a Democrat-led House in early March.

The two talk about TransPerfect’s phenomenal Q1 2021, as the US-based Super Agency delivers 21% organic growth in the first three months of the year, adding USD 40m to top-line revenues in one quarter.

TransPerfect’s Q1 performance sees the company enter a two-horse race with UK-based RWS (post-SDL acquisition) for the title of world’s largest LSP, which looks set to be a close fight based on RWS’ latest trading update.

Then there’s new kid on the media localization block LinQ, which made its official debut in March 2021, and was put up by none other than Björn Lifvergren, founder and former CEO of BTI Studios, which merged with Iyuno (now Iyuno-SDI Group) in 2019.